Some of our SNAFU stories have been adapted by Tim ‘Deadpool’ Miller and David Fincher for the Netflix Original Series Love, Death + Robots. Watch it. Watch it NOW.

We’re very proud to be publishing the second official anthology for this groundbreaking series. 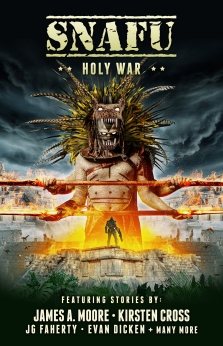 Religion and ideology have fuelled war since the beginning of humankind.
Deeply-held beliefs can lead to factional wars, and it’s been said that more people have been killed in the name of some god than for any other reason.
The Crusades, the Inquisition, Northern Ireland, the Middle East, and many more…
SNAFU: Holy War offers high-action horror based around conflicts of religion, either overt or covert, featuring previous SNAFU favourites along with some of the best brand new writers working in the field today.

“These folks GET it!” — Tim Miller, director of Deadpool 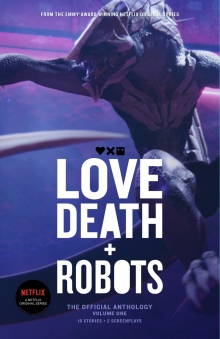 We’re very proud to be publishing the official anthology for this groundbreaking series. 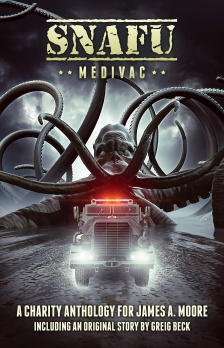 A charity anthology for James A. Moore’s medical costs and ongoing costs of living.
120,000 words, with four original stories and eight best-of-SNAFU reprints.
+ + +
Some of the most important military missions have been medical evacuations – medivacs.
Soldiers don’t often fight for themselves. They fight for the guy next to them, their brother, their friend, their family.
And they fight hard.
In 2019, Cohesion author and friend… hell, more family, really… Jim Moore was suddenly in the struggle of his life. He overcame the Big C, but his fight is ongoing. A fight to pay for all the treatments in a country that has no free public health system, and a fight to claw his way back from the ravages of the very treatment that saved his life.
His fight is our fight, and if we don’t fight for our friends, is there anything really worth living for?
+ + +
All income from SNAFU: Medivac goes to Jim to help pay his bills and keep his household functional.
Once this is no longer necessary, the income will transfer to a cancer research or treatment charity. 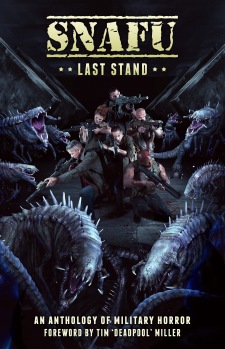 “This is it, mofos. This is the end game.
We’ve got nowhere else to go, and no bugger’s coming to save us.
We’re either doing this or we’re gonna die trying, because it all depends on you.
There is no going back. So lock, load, and get ready to rumble!”
SNAFU: Last Stand is a collated anthology of short stories of a final battle, no matter where it is or who it involves.
It’s the Battle of Thermopylae, the Alamo, the Battle of Mirbat, the First Battle of Mogadishu, the Battle of Hel, and Custer’s Last Stand, all rolled up into one badass monster-fighting basket of SNAFU-style action.
Recommended by and foreword written by Hollywood director/producer Tim Miller, the visionary behind Deadpool, Terminator: Dark Fate, and Netflix’s Love, Death & Robots, in which many SNAFU stories already feature.
Don’t miss out, ’cause from this, there ain’t no comin’ back..

-“This collection is truly a buffet of style, tone, and desperate action… I mean fuck me there’s some cool shit in here!” — Tim Miller, director of Deadpool

Multiple stories of soldiers facing horrors beyond imagining, while facing the demons within.
No overarching theme applies to this release, except for action-heavy tales of military or paramilitary action.
Featuring Dirk Patton and James A. Moore/Charles R. Rutledge along with a selection of stories by a host of favourite SNAFU authors and talented newcomers, this is SNAFU smashing back into the scene.
Award-winning editor Amanda J. Spedding teams up with Matthew Summers to slam-dunk the military horror scene once more.

-“I’ve read the entire SNAFU series and I can wholeheartedly recommend ’em — every one of them delivers the goods.” — Tim Miller, director of Deadpool

Special Forces.
The very sharpest edge of any military throughout history. Now, they face their greatest challenge yet. Undead, mutations, monsters, all the things no-one ever believed could happen are here in the pages of SNAFU: Black Ops.
Read tales from existing bestselling series by Jonathan Maberry, Nicholas Sansbury Smith, Hank Schwaeble, John O’Brien, and James Lovegrove, along with some of your SNAFU favourites in this collection of the very best stories by the very best writers of military horror.

-“These folks GET it!” — Tim Miller, director of Deadpool 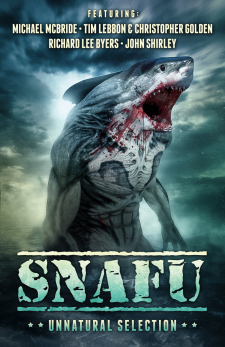 INCLUDES KILL TEAM KILL by Justin Coates, as seen in Netflix’s Love, Death + Robots.
Man versus Nature.
In the 70s and 80s, animals ruled. Anacondas, piranha, giant crocodiles/alligators/lizards, mutated bears near nuclear power stations, prehistoric sharks all featured heavily in books and films, when bio-horror was at its modern peak.
This anthology of military-bio-horror stories is inspired by those classic days.
Think Greg McLean’s Rogue, Lake Placid, Eight-legged Freaks, Anaconda, Meg, Prophecy, Deep Blue Sea, and other films/books where people (in this case soldiers) are fighting against mutated, weird, or ultra-dangerous animals.
Join some of the best writers working today, along with some SNAFU favourites, for an unnaturally good time.

INCLUDES SUITS by Steve Lewis, as seen in Netflix’s Love, Death + Robots.
“Join the military,” they said.
“See far-flung worlds,” they said.
“Meet interesting creatures, and kill them all.”
Soldiers fighting aliens in unforgiving landscapes, where every breath could be their last.

From near-future to far-future, featuring some of the best writers working in the field today.
Reissued in 2018. 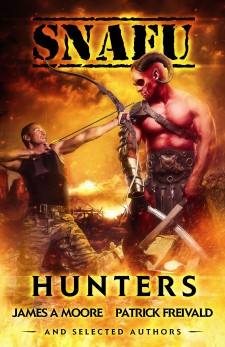 INCLUDES THE SECRET WAR by David W. Amendola, as seen in Netflix’s Love, Death + Robots.
From the darkness of the abyss to the subtle shift of shadows dwell creatures that prey on us all.
Be they straight-up monsters or nightmares behind a human mask, they track us and they kill us.
Sometimes, they play with their food, where death would be a kindness. But there is hope.
There are those who search out the monsters, those who hunt the hunters.
These are their stories.
Featuring 13 stories of military horror by some of the best known and emerging writers in the genre. 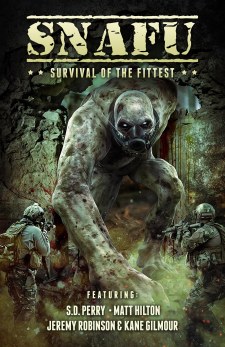 SNAFU: Survival of the Fittest

INCLUDES SUCKER OF SOULS by Kirsten Cross and IN HALLOWED HALLS ENTOMBED by Alan Baxter, as seen in Netflix’s Love, Death + Robots.
Survival horror… with soldiers.
Straining to make that one magazine last.
Making sure not to waste a single bullet.
Lost in the shadows, low on ammo; only edged weapons; wounded, fighting to survive, the last remnants of the mission team trying to make sense of where they had gone wrong, and how to make it out alive with next-to-no resources.
Featuring nearly 100,000 words of military fiction and sci-fi.
– Jeremy Robinson & Kane Gilmour (Callsign: Deep Blue, Ragnarok, and Omega, all part of the phenomenal Jack Sigler/Chess Team series)
– S.D. Perry (has written extensively in the universes of Star Trek, Aliens, and Resident Evil, among others)
– Matt Hilton (author of the high-octane Joe Hunter thriller series)
Plus another six established and emerging writers. 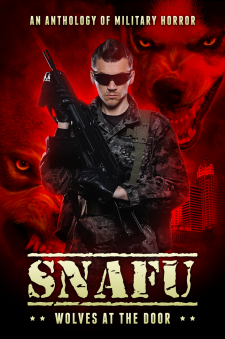 SNAFU: Wolves at the Door

SNAFU brought the pain.
SNAFU: Wolves at the Door will bring the bite, with soldiers fighting for their lives against were-animals.
In the blackest night or under the full moon, danger is lurking.
It’s survival at all costs when you’re fighting against an enemy that could tear you apart – or convert you to the other side.
Against the backdrop of an untamed wilderness or the dark depths of the city, the ultimate clash between the forces of man and nature rages on.
Whether battling the monster within or a war around them – these soldiers may find the cost could prove too great. 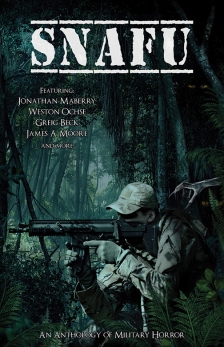 SNAFU: An Anthology of Military Horror

War is hell . . . Soldiers fight to survive. They fight each other, and they fight the demons inside. Sometimes, they fight real monsters. This book collects stories of ancient myths, time travelers, horrors in the old west . . . and the soldiers who fight them. Featuring some of the best writers working in the field today, this book includes works from Jonathan Maberry, Weston Ochse, Greig Beck, and James A. Moore who lead the way, with a contingent of emerging authors to back them up.

–“Consistent quality and extraordinary variety.” — This is Horror, blog